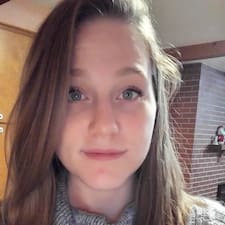 I had a one night booking, and the woman and I communicated quite a bit before her arrival date. She informed me that day that SHE was not sure if she would make it, but that her companion still might be able to. I said that was fine, and she gave me his name. I told her to give him my contact information if he needed anything. This was before I read that 3rd party booking isn't allowed. So the time comes and goes, and my guest house is visible from my house and we never saw any vehicle come. I contacted the guest the next day and asked if everything was alright, because she didn't cancel or anything. She responded and said that she didn't make it but her companion showed up and had to leave because he was having a reaction to some allergen. I asked if he was ok and what kind if reaction and she said he was fine and she said she thinks it was maybe watery eyes or something. I asked where he felt he was getting the reaction or what rooms he spent time in, she said she didn't think he spent time in any room in particular but that maybe in the entry way he was feeling it. Now, we just painted about every room in the house and gutted and installed a new bathroom the weekend before. I am sensitive to allergens and didn't notice anything on that day, but everyone is different I guess. I said I would check around when I went in to clean but I apologized that things didn't work out. I did not offer a refund because she hadn't reached out to me or cancelled or anything and she did not ask...I think she may have been waiting for me to offer. I did check the house and the only thing I can think of is the cleaning supplies or ONE air freshener or paint smell, which I think had aired out plenty.

Airbnb wants me to review that guest but I don't think I can leave a review when she herself didn't actually come and she didn't cancel but I have to leave stars and a comment but they don't really apply. Any advice?

Re: Guest didn't come/stay but companion stopped in?

@Olivia530  it's too bad Airbnb doesn't have a text-only review option for situations like these, since obviously you can't rate each other on qualities neither has experienced.

You can choose not to leave a review - there's no penalty for that. But if the guest does decide to review you, it's best to post a review that can be cross-referenced to show that the guest did not stay. I wouldn't worry too much about the star ratings - they're only visible to hosts with Instant Book anyway.