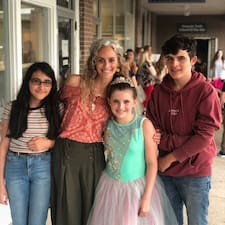 Has anyone dealt with this? This is the second time I've had a guest stay in our basement apartment and at some point started smelling a very strong chemical odor. Again, second time this has happened (different guests) same exact odor. it's a very distinct odor, smells almost like spray paint but not quite.

Both times they have told me they were cooking or burning candles, never in my life have I smelt any food or candles that smelt like this!!

I know what pot smells like and have confronted guests on that before, but I am not familiar with other drug odors like meth, crack etc. I know they both have strong chemical smells but don't know what they smell like specifically. Can anyone enlighten me? I know it's hard when we are talking about smells... And maybe point out any other signs I should look for?

With the first guest, she told me she had left the apartment about 15 minutes before but that I was welcome to go check it out. I did and nothing smelt strange, I don't know if it had dissipated at that point and was just still stuck in the vents... very strange!  I noticed that she had the crockpot out on the table, and it looked like she had just left in the middle of what she was doing because she had some popcorn and snacks in a bowl but picked up and left.  Might be completely unrelated just seemed strange. with this particular guest is was over New Years and she came and went a lot... I don't know, I wonder if she was cooking something and then taking it to people.

With the current guest he claims he was cooking stovers chicken parma... yeah, right! My 12 year old daughter had to sleep in my room last night because the smell in her room was so strong.

I don't want to accuse guests of drug use if it could be something else, I just wish I knew exactly what I am smelling so I could call them out on it, and threaten to have them removed. I have had to do that in the past with people smoking downstairs... I got their reservation cut short.

Invest in an air quality monitor - this one can be purchased from Amazon and will connect with your phone.    Awair Element Indoor Air Quality Monitor - AQM8002A    It will not prevent stinky cooking, but should alert you if the VOC level increases.  If your daughter had to sleep in your room due to smells, you may want to have your  air system ductwork checked over.

P.S. You could ask your guest if he remembered to remove the shrink wrap from the box before he put it in the oven.  That would certainly have stunk.