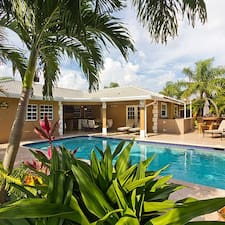 can anyone help get my listing back up and running? airbnb hasnet contacted me in over week ,,,,

they wont even give e a reason

Did you have a guest complain about a safety issue and therefore Airbnb is suspending your account while they investigate?

i am not sure. we put in an insurance claim for a broken bed a clogged drain and before it being resolved it seems like they suspended us. however there is no one to contact

@Villa-De0  What likely happened is that as soon as the guest saw that you were trying to charge them for damages, they contacted Airbnb with some bogus story about a safety issue, that you were spying on them, that you discriminated against them due to their race, that the place was infested with insects, that sort of thing.

Unfortunately, terrible guests seem to try to extract this type of revenge. You wouldn't be the first host it happened to, by any means.

And it appears that your entire profile has been deleted, not just your listing suspended. If it's just suspended, your profile can still be seen, but the listing just doesn't show up in search.

In other words, it looks like your entire account has been deleted, unless you are posting here with a different profile than the one your listing is under.

As it seems not only your listing is suspended, but your account is also deactivated: so what terrible things happened to be punished like this ?