I got my three star review for location. All the others were 5 stars. Guest said it was further from the city than she thought. My listing is accurate. It says 5 miles to downtown and 8 miles to the beach. She said it took 17 minutes downtown, which means their Uber ride was more than they hoped, when they choose to a bar deep in the bowels of a busy city. Most guest don't Uber and I even provide a parking pass to the beach so there are a lot of other places to go and options to get there. It also flooded downown with heavy rains durning their stay. I contacted Airbnb and provided a link to a local news report of the flooding and the streets that were closed that makes downtown even more of a traffic mess, as that was out of my control but Airbnb said they read the review and it didn't violate their policy. I don't understand this as the guest had the exact address for months and can easily check any distance, Uber trip calculator, or message their host at any time before or after they make a reservation. The location in my listing is accurate, the neighborhood is accurate, and even the distance from downtown that happens to be super easy to access. If the location is accurate. Most of the other Airbnb listings say its 5 minutes to downtown and 5 to the beach which is impossible when they are 25 miles apart. This has zero perspective and puts host and other guest at a complete disadvantage when their listing is accurate and even provided the exact distance to that particular destination. Their own policy says host aren't responsible for something outside their control. I added another paragraph to the listing explaining that it can take a while to Uber though a busy city, and left I reply I kind of wish I hadn't. This messed me up and killed my momentum as I'm afraid my rating may go down and maybe I picked the wrong hosting platform.

There are quite a few threads bemoaning this on the forum. But neither the location rating or the value rating are really anything to fret about. Airbnb will sometimes warn hosts if their cleanliness or communication rating drops too low, but location isn't any big deal.

You are being accurate about the mileage, but in many cases mileage doesn't tell anyone how long it would actually take to drive that distance. In my touristy little beach town, the traffic can be terrible and the streets are narrow- it can take me 10 minutes to drive 5 short blocks if I have to get across the tiny downtown core on a weekend. So if I were you, in addition to the mileage, I might also write the approximate time it takes, making it clear that would totally depend on exactly where in town someone is going and how the traffic might be.

But just because one guest acted ridiculous about it doesn't mean it will ever be an issue again.

BTW, if you ever leave a response you wish you hadn't, you can ask Airbnb to remove it- they will remove your own reviews or responses on request, they just won't remove a guest's review or response unless it violates their policies.

Thank you Sarah! I think I'll at least try and have my response removed. What bothered me is that its not accurate. As it was flooded where they wanted wanted to go and I provided a link to the news report that would have fit their review policy for a situation beyond the host control. I added that it takes 14 minutes to get to the Visitors Center that is in the center of the downtown area, 10 minutes to get to the city 4.5 miles, and 5 minutes to go one mile though the city. Hopefully this doesn't happen again. I may also ask that future guest read the listing especially if they are first time. She also ruined all the towels with makeup, broke an ironing board, and first person to set the smoke alarm off at night, so I simply didn't leave a review for them as I'm kind of new at this. I'm just wish there was a way to remove post that are inaccurate and beyond the host control, when their listing is accurate. Thank you though, its good to hear from other guest.

The good news is that this guest still left you an overall 5-star review. It would have been very disappointing to lose your perfect 5.0 rating if this guest's thinking on location carried over to the overall score. So you and your space are obviously doing something right to encourage 5 stars overall. Your ratings are still great and no one even knows that the 3-star location rating exists so I would try to get your response removed as it looks awkward.

Hosts have been pleading with Airbnb to get rid of the location and value ratings for years but with no success. They are really useless and have very little impact on a guest's decision to book. Personally, I would not skip over a place because it had a 4.7 rating on location or value. But I may if those were the scores for cleanliness or communication.

@Emilia42 thank you, and yes I agree my response looks awkward. They did ruin all the towels, broke an ironing board, that had simple little latch to retract it, so that factored in. But I'm usually better at phrasing things. I agree the overall rating of 5 stars is good. I should have phrased that more for future guest. The issue with this is that they are including the commute though a busy city into the time it takes to "get downtown" for their Uber fare. I may include it takes longer to get to the bars downtown, to discourage guest like that. Customer service is supposed to call me back sometime so will see if I can get my response removed. For me adjusting to challenges is part of it. I feel guest get the impression I'm at least very honest. I'm also going to change the wording in the listing. It is a legal STR in the City but will simply say its a legal B&B as there is no such thing as a marsh front property in the center of downtown. I still think, though, if the listing is accurate, and there was flooding that was documented over 5 miles away, that's out of host control. I know that's kind of tough though, as so many listings say its 5 minutes to get somewhere and is actually much longer. Appreciate the comments though.

@John5097 Keep your field of focus wide when reviewing situations like this, so that you don’t lose perspective. Let me say, I totally understand where you’re coming from, and your frustration. But when I (as guest) look at your listing and reviews, all I see is 5 stars and great written reviews. Everyone is happy! Getting that review removed just to get rid of a  lower score (that no one even knows about) in a category that is unimportant, would be a shame.

When a guest annoys, best thing to do is take a few days to calm down, then think about what you can learn from that guest about whatever it was they were unhappy about. Maybe make a few adjustments to your description or what have you, maybe not, depending. Again, keep a wide perspective.  Take the full amount of time you have,

to write your review of them, and think carefully about your response to their review of you, if need be. Your audience is future guests, so you want to use the opportunity to highlight things they might want to be aware of, and reassure them you take all concerns to heart, are always working on improving, and that booking with you IS a good idea. And be careful not to publicly respond to private feedback, as no one will know what you’re talking about, and you may inadvertently bring to light a negative that was otherwise hidden.

@Colleen253 yes I totally agree. Hopefully I can at least get the response removed. No worries though as I'm always booked, guest love it, and that one will drop down the list.  Its been a real challenge because the town of Folly Beach also imposed Covid parking restrictions for six months and issued $200 parking tickets without any signs. So you can imagine single moms wanting to go the beach and get hit with $200 ticket during these times. For that I started including a parking pass that saves guest $15 which was a huge hit, so I'm looking after my guest providing parking pass in completely different jurisdiction. I simply can't do that for the downtown area and be on top of every little issue in the entire county that is out of my cotrol. I did include this picture that gives better idea, and should eliminate the occasional inaccurate review by disgruntled Uber user. 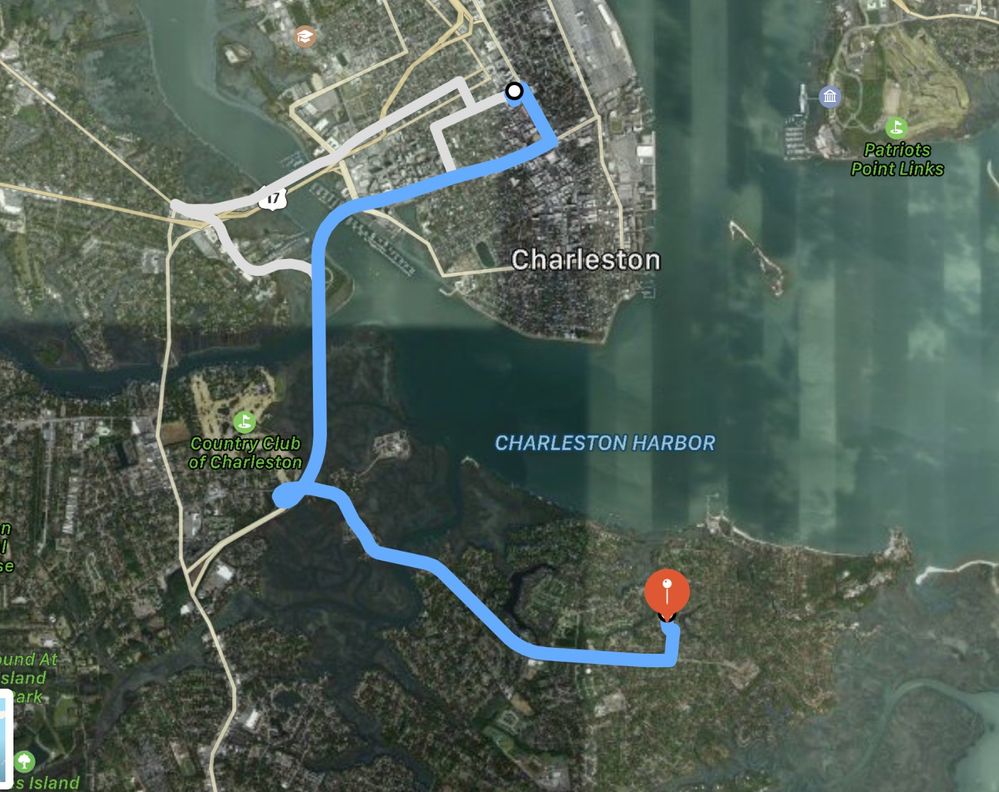 "Location is 6 miles to the Visitors Center located in the center of historic district downtown. Usually takes 14 minutes, 10 minutes to get downtown, and 5 minutes to travel one mile into town. More budget friendly to dive and park."

@Lisa723  lol yeah better edit that out.. Its $2 an hour at all the parking garages and some free parking that's all in my guest guide, $5 all day parking, and the shuttles are all free downtown.. so definitely more budget friendly than $12 Uber each way, but gonna take that out.. as its too much to explain the listing and guest might think its free to park.

Just a quick follow up. Airbnb customer support, Renai, got back with me and removed my public response to the review. She was very nice. Thank you all so much for the honest and constructive comments and information! Hopefully Airbnb will improve the guest review process to better inform guest that host should only be rated on the accuracy of their listing, not what a guest wish list.