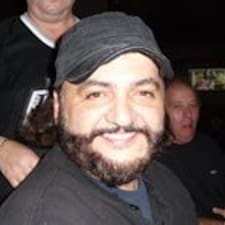 Booked my house for 4 nights on consecutive weeks, to 4 people. Got a text from "guest"  that booked, and she said  that "her crew found mouse droppings throughout the house". I realized that the booker was just an agent for a construction crew, and she was getting all her info secondhand. I questioned my housecleaner, and she replied the house was clean, and there was definitely no droppings. (ive never seen a mouse in that house)

The booker sent me photos that her crew took, it seems they went around house and took photos of anything damaged, (including an obsolete shower that has not been used in 15 years), she added that the crew had left for a hotel and asked for a refund.  One photo actually required that a dresser  be moved, which I found strange.  It got stranger when my housecleaner entered the house, it seems 3 of the beds were slept in (late aft nap?). So initially the house was fine, but something happened, I have a theory...

Here is what I have pieced together...the crew arrived at the house around 5 pm, they took a short nap, I assume they were looking forward to watching an important NHL GAME (toronto vs montreal). Approaching gametime they realized my tv package does not include the channel on which the game was on, so they decided to lie to their booking agent, say the house was a "health hazard" (she actually said that anyone entering should be wearing thick gloves), and they got moved to a hotel, which had the game available.

This is the only logical explanation, the house is old and it has some flaws, but its clean, sunny and charming. The crew went to a lot of trouble to convince their booker that the house was a health hazard, and it worked . I am not sure if I have any options here, but I needed to vent.  My cleaner is also upset, because they maligned her work.

Sorry you have had these issues. @Spilios0

When your guest booked what did she say was the purpose of her stay @Spilios0 ? You are correct she should have booked this as a Airbnb at work booking.

By the way why is there an obsolete shower in your rental property that hasn't been working for 15 years?

And why are you showing no photos of the bedrooms and bathrooms of your main house listing and only an outside photo of the apartment.

To help manage expectations you should have photo's of every room in the property that is available to guests.

@Spilios0  I'd say it's a sure bet these guys are just total scammers. I'm not sure what you are asking for here- if it were me I'd report them to Airbnb as scammers and refuse to refund, if that's the question.

I looked at your listings and also don't understand why you have a home with 4 bedrooms and not any photos of the bedrooms. If you want to get good guests, you need to do a better photo gallery so you attract nice family groups. Guests want to see where they will sleep and what the beds look like.

And I don't understand your New listing at all. There aren't any  photos, except the cover photo.

People are very visual- you need to put on a good show.