Hide Identifying Information In A Review? 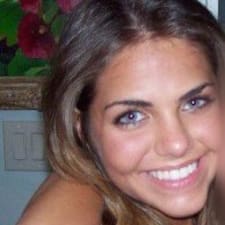 I recently had a guest leave me a review that contained enough info to identify my exact address down to the T.  The review itself was very positive and I believe the rating was a full 5.  I was a little concerned that strangers might be able to find me based on the info in the review (I live at the home that I occasionally rent out) so I reached out to support to ask them if they could blank out certain words in the review text that would allow people to identify my location - kind of like how the chat system will replace a phone number or e-mail with something like {phone number removed by Airbnb}.

The rep that worked my case didn't really send me a reply, but instead removed the review all together from my listing.  I contacted support back and asked whether they could just blank out the identifying words instead.  They responded they couldn't.  Not wanting to show this much detail about where I live on the listing, I asked if I could keep the rating (I am pretty sure it was a 5 since after they took out the review I went from a mid 4.9 to a high 4.8) and have only the text removed.  Again, support said no.

Has anyone had a similar issue before and was able to have certain identifying words in the review blanked out?  Or at the very least, kept the rating but not the review text itself on the listing?  My guest was trying to be genuinely nice, but safety does come above everything else and I'd rather not have a review telling strangers exactly where I live.  I've thought about contacting my guest to ask if she could edit her review, but from what I understand, she wouldn't have that ability either. Have seen this before - deleting an entire review instead of just editing out one tiny detail, or allowing the person to write a new review.  It doesn't make any sense to me.

Unfortunately you have struck an inexperienced agent who has not sought to seek a higher opinion for fear of being seen to be inefficient and lacking in the required job proficiency.

CX absolutely do have the ability to 'edit' the review of either a guest or a host.

I had a guest once whose name was Cooper.....but he was affectionately known as 'Coop', for short. He was a nice guest but did have a couple of annoying little habits.....not enough to make me want to cane him in through the resolution centre but, I thought I should make light comment of it during the review process to warn other hosts.

I stupidly did not check my review before hitting submit, and at that point in the review, 'spellchecker' had taken over and, it came across as...."Although a nice pleasant guest,  Poop struggled with some of our house rules"!

As soon as I posted it I realised the mistake I made....and as he had already left his review of me, at that point I could not edit it!  I got onto CX straight away, they read the review and agreed that the wording could cause unwanted embarrassment to both the guest and I, and they changed the name from 'Poop' to Cooper for me!

You are probably a Twitter user and know how to use, but just in case you don't, here is what you should do.

Step 3: Send a Direct Message (DM) explaining your issue and wait for their response.  They may ask for information such as your listing and personal verifying information.....but always provide it over DM so it is not public.

Your issue is a legitimate one Michaela and I am sorry that you did strike such poor quality assistance, but CX is stretched to the limit at the moment and if you follow the path I have given, I am sure they will be able to help you edit that review!

"Poop struggled with some of our house rules"!  @Robin4 , whahoo! that was a hoot, I havent laughed so loud in a long time.  Almost spit out my Oatmeal!!!!!!!   I would have thought I would learn by now Spellcheck yourself before you press send but yet I still send re-spellings of peoples names and words that have no place in my response.  BTW, I have used translators on my phone very successfully with guests in the past but they can say things that you really never intended, I got a few really strange looks from my Chinese friend Jinmea more than once over the month she lived with us, her translator was just as surprising.  That said, it does work better that waving hands in the air and pointing when you dont speak each others language!  JR

Don't get me started on Google Translate John!

I had some nice Chinese guests here and they seemed to enjoy their stay and I felt a good review would follow!

The review was written in simplified Chinese so, being inquisitive, I though I would run it through Google Translate........ 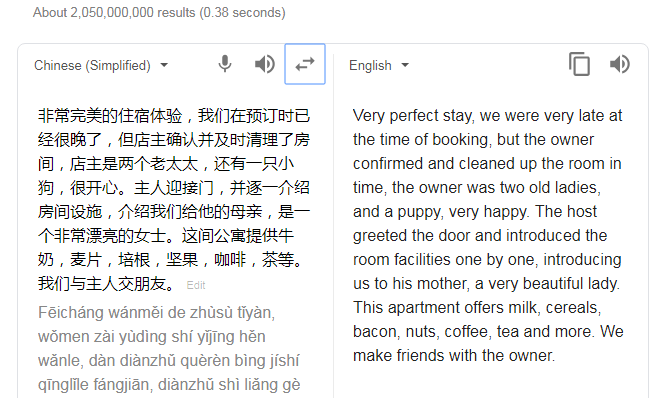 Bloody Google translate has a lot to answer for!

@Robin4  I moved on from oatmeal to spackling, needless to say there is a plop of mud now where it shouldn't be!  So funny, it would seem that it should just be word for word but some words have no meaning in some cultures and dont translate so well and others can be just plain offensive based on a single wrong inflection!  One must have a good sense of humor to be in the hospitality business for sure!  Best, JR

@Robin4I also practically snorted my coffee out of my nose just then! Love the translation!!! And Poop!! Too funny 🙂

Hello.......Thanks for the Twitter info, I'm taking note of that, figure it may come in handy one day.