Hosting a guest who lies 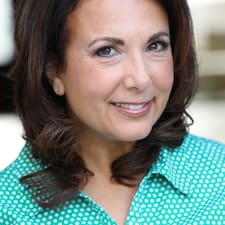 I am a co-host and we recently had a guest, Vicki S., who rented one of our units.  Unfortunately, we had a leak in the closet, which once notified we have 24 hours to fix.  We have a strict cancellation policy here in Los Angeles.  People can be flaky at the last minute.

This guest notified us and I wrote back within four minutes.  The owner of the house and the handyman were there within 20 minutes.  She answered the door, fully clothed, fully packed up, very aggressive with a very loud voice,  and the trunk of her car halfway packed.   The problem is that she accused the owner of the house and the handyman of barging in while she was in the shower so that they could see her naked!  She did not respond to me at all in the thread and she demanded a full refund.  We were awarded one-half refund free of penalties and she was awarded half.  It seemed unjust since she clearly lied and there were witnesses to the fact.

It makes me worried that every time a host knocks on a door there needs to be two people as witnesses and even then things can go awry!  Allegations like this are serious because they have to do with sexual misconduct and it can disparage a decent person's name all because someone tries to make their case by terrible lies.

It makes me disappointed in people, but we are forging on.

Re: Hosting a guest who lies

@DeAnn193 I trust you know your listing is suspended (or snoozed)?