How to deal with a bad or unfair review 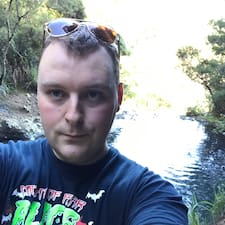 Hi guys, I'm not new to Airbnb but on the (very rare) occasion that I get a bad review I often feel a little stumped on  how to deal with it.

I have two close friends who do Airbnb and they (like everyone else from time to time) get the occasional negative, unfair or unreasonable bad review.

For my smallest room - I recently had a negative review from a guest who said something along the lines of 'Can't say this place is terrible but could be cleaner' etc etc. I've not been letting that room long and have around 10 reviews for it. Of the 10 reviews I've had eight 5* reviews, one 4* review and finally last night's poor review - but 9 of the 10 have given me 5* for cleanliness, apart from last night's guest that gave me 3*.

When the guest checked in he seemed a nice guy, he used the bathroom, showered and afterwards sat in the lounge for a bit, I made him a cup of tea and had a brief chat with him before we both went off to our rooms just after 11pm.

This morning I had a chat with him when he was making breakfast - it was his first ever time using Airbnb and I asked him if he'd had a good sleep, if everythign was to his satisfaction and he said it was great and had had a good time.

To then leave me a bad review totally mystified and confused me - I totally didn't see that coming at all. He had ample time to say 'I have a problem with x' or 'I was unhappy with such and such' but nothing.

After reading his review I messaged him politely and said 'can you elaborate on what was wrong or what you were unhappy about?' He did reply but could not nail it down to anything specific that he was actually unhappy about.

The most annoying thing however is that only having 10 reviews for that room it brings down the average quite a bit - it had previously been 4.9 something.

I guess it's one of those experiences where you say 'that's life'.

If you were looking at my room and saw nine great reviews and one bad one - would the one bad review put you off or not? How much allowance do you make for things like that when booking? I'm always curious as to how people consider such things when booking.

@Neil408  I've never been a guest, but if I were, that review would't put me off at all and your response to it was perfect (although I wouldn't necessarily mention star ratings in a response) and makes things quite clear.

As far as whether writing a response just brings attention to a bad review, and shouldn't be bothered with, that is sometimes true, but I think when it comes to things like cleanliness, it's important to clarify. It's not even always really necessary to write a detailed response- something like "Outlier review. Please see our other reviews for an accurate assessment of the accommodation" may be enough.

Then there are the bad reviews that go on and on and just make the reviewer look crazy to anyone else reading it. As long as you have at least a page of good reviews, those probably don't require a response other than "This review says everything about the attitude and behavior of this guest and doesn't reflect anything real about my listing".

Unfortenately You have already replied to Your guests review and I would have never written what You wrote. Your answer sounds defensive.

I would have written:

And pls forget about the average rating. That really means nothing on airbnb.

But the cleanliness was to my usual high standard and I wasn't in a rush. I cleaned it thoroughly like for every other stay. That's the point.

Does the average rating really mean nothing on Airbnb? I have been trying to get 'superhost' status for a while. For a brief period last year I achieved it but then cancelled due to unforeseen circumstances and Airbnb took it away from me.

There is an active discussion about the importance of star rating in regards to search results positioning: https://community.withairbnb.com/t5/Host-Circle/Let-s-talk-about-search/td-p/1346232/page/3.

As @Ute42, has mentioned we have thus far come to the conclusion that even very low rated listings will show high in the results, because they are getting a lot of views and reservations.  An experienced Airbnb user will read the recent reviews to get a general idea about how the space is being kept and how the host conducts guest relations.  You probably will not see any decrease in bookings due to the one low rating.

I don't doubt that You've cleaned You place thoroughly.

The point is: The review of Your guest is online and You can't change it. All You can do now is present Yourself in a positive way to future guests. But You are argueing with Your guest. Your position is: „I am in the right and my guest is wrong“. Future guests may think: Hu, this guy is bossy.

Why not apologise even if there's nothing to apologise. That leaves a great impression.

Concerning the preferences of guests booking a place pls read this thread.

Well I am a bit bossy - I'm a Project Manager for a day job. But I'm not usually bossy when it comes to Airbnb - I'm pretty hands off and relaxed when it comes to guests but feel its only right to defend myself when I have a critical review.

As usual you are a source of great wisdom Ute, but I am not sure apologizing for a mistake not made is a prudent thing to do on Neil's part.

As you know Ute, every guest likes to feel you have made a special effort just for them, they like to feel special, and by making a statement 'Sorry I might have been in a bit of a rush and let the standard slip a bit' is going to make every future guest who looks at that think....."Oh I hope he is not in a bit of a rush when he prepares for us".

I agree with what you are trying to say but, a better way to approach it may have been .....'Try as I might to offer the highest standard of cleanliness to every guest, if something slipped by me on this occasion I am truly sorry'!!

Good on you mate!

@Neil408 @Ute42 - I'll admit that in the early days I personally DID reply to bad reviews with long defensive rebuttals... (Now I've bowed to collective wisdom & am less likely to do that!)

However, one of my top three nicest guests ever, a young German man, who stayed 5 nights with his motor bike, said he chose my place BECAUSE he loved my brilliant (blow by blow) response to the bad review by (American) John!

So defensive is not always counter productive!!!

To be real honest: I hate cleaning and my listing is not the cleanest place in the world.

When guests book I always send out this message to them:

Ever since I started doing this in 2017 I didn't have one single complaint about cleanlyness anymore. And only 2 guests out of 100+ ditn't book after reading this.

@Ute42  I don't particularly mind cleaning, in fact I rather like it, but my place was built with easy cleaning in mind. I can't exactly hose the place down, but close.

However, I've read of hosts who crawl around on their hands and knees with a blacklight and a lint roller making sure there isn't one stray hair or piece of fluff and it'll be a cold day in hell before I go to that extreme.

I also have a dog who sheds like crazy and no matter how well I clean, there will always be the odd dog hairs stuck to something. So I say as much to guests when they arrive, do't stress about it, and I've never had anyone complain. I also tell them that even though I clean their room and bathroom thoroughly just hours before they arrive, that as this is the tropics, they might very well find a some gecko poop, or a trail of ants the following day, because that's the reality of this environment.

That's very interesting! Some of my guests have been very picky. I know when I started off with Airbnb my prices were much lower and I feel a lower price attracted much more picky guests.

@Helen350  Isn't it great when guests totally appreciate you for who you are, and what comes naturally for you to say, rather than feeling you have to behave or talk in some "professional" way that feels like an ill-fitting piece of clothing?

I've read some pretty funny and snarky review responses that would make me want to book with that host. At least I'd know they had a sense of humor and could be as sarcastic as I can be.