My guest flagged me for some unknown and phony safety violation that I can't defend. I lost a month's worth or rent. 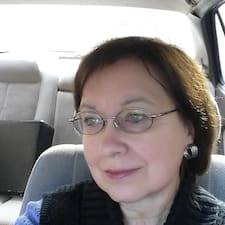 This young lady reserved a full private apartment  in our Victorian house. She arrived on time and we had a seamless check-in.

She had a few good reviews from traveling with her family in another country a few years ago; she seemed like good guest material.

We chatted and she said she was breaking up with her boyfriend, which we do get guests in her situation, it happens.

I always meet and greet the guest and walk them through the premises. She was very nice.

She didn't bring the dog, just a few suitcases.

My husband and I have a dog also. We live on the 1st floor, her suite is on the 2nd.

She and I agreed that we would text each other so our dogs don't cross in the hallway and the anticipated drama of 2 dogs that don't know each other would bring. My dog stays in our space until we escort it out to the backyard.  We never let it roam around the common hallway and stairwell.

She says she walks her dog every few hours because she works out of her home.

She said she could carry her dog down the stairs so her dog doesn't additionally leave the smell of paw prints on the stair carpet so my dog wouldn't even know her dog is in the house. I assumed she had a tiny dog that's carrying size.

As she was getting ready to move her car and get the rest of her stuff, I introduced her to my dog.

She says "oh your dog is the same size as mine". My dog is almost 60 pounds.

I asked her to not carry her dog on the stairs because that's too big a dog to be carrying.

She agreed and said it won't be an issue anyway because she has a set schedule for walking and our schedule for taking the dog out is different than hers.

A few hours after she checked in I texted her because I forgot to show her how our vintage Victorian brass shower works.

I got no answer so I thought she was still out collecting her dog and more stuff from her boyfriend's place.

I think the young lady stayed the night but I can't be sure because we turned in early.

My other guest across the hall says he heard someone in the room that night.

Imagine my surprise when an Airbnb rep leaves me a voicemail the next day and says the reservation is cancelled due to safety issues.

I called and asked why, they said they can't divulge because of privacy issues but it could be anything from assault to unsafe environment.

I was very upset that something awful happened and I texted her but she didn't answer.

Shortly afterwards another guest I'd been in touch with messaged that she couldn't find my listings anymore.

Airbnb took all  of my listings in 6  different locations off the market due to this bogus safety issue!

I think this girl made something up to avoid paying me either because she found another place, got back with her boyfriend,

figured out that it would be difficult to sneak her boyfriend in as a second guest, or some other reason.

She sent two inquiries about apartments on another housing site I post on.

I have a strict cancellation policy  and I'm wondering why Airbnb:

1- doesn't at least give  hosts a clue as to what these allegations are so we can defend ourselves and counter them, especially if they're untrue

2-believes the guests over the hosts on these matters

does airbnb reimburse us for lost income??

Re: My guest flagged me for some unknown and phony safety violation that I can't defend. I lost a month's worth or rent.

Ugh, if this is the case, it is sad that we live in a world where even the most common terms have to be disclosed. I would suggest that every guest look up the definition of an apartment before choosing to stay, visit, or live in one.

Re: My guest flagged me for some unknown and phony safety violation that I can't defend. I lost a month's worth or rent.

Hi, thanks all  for reviewing my dilemma. This is a private apartment in a Victorian house but there is another private apt across the hall which I disclosed to the young lady. And they never crossed paths because the other guest wasn't home til late in the evening. She seemed not at all concerned about this.

The doors lock and it's a very secure location.  It's no different than going to an apartment building and running into someone in an elevator or hallway.

The young lady has ignored me on all communications completely so I can only assume my original suppositions on why she changed her mind after moving in.

I did receive a modest 'refund'  from airbnb with no explanation so I'm guessing that without disclosing that this girl either had no case or is maybe some sort of repeat offender, or who knows what's going on with her, but airbnb did , in a way, acknowledge that there was an issue not entirely my fault and I may have had a legitimate concern about this girl. I understand their privacy stipulations.

My concern is that if this trend goes viral - claiming safety issues without real cause - then hosts will have a nightmare on their hands.

I saw somewhere that there's been cases of people buying bedbugs in order to claim infestations.

Can that be true?

I just had a guest, extremely well rated, a seasoned guest and constant traveler in her profession, who got a full refund because she had bites on her.

She was there 3 days before texting me about bites. I tore the room apart that same day she texted, found nothing, got bedbug protector mattress covers and sprayed. The whole nine yards.

She subsequently stayed in the same room but 2 days later got a few more bites on her elbow.

She sent me  pictures  with bites taken in the room both times. Looked like flea bites to me.

But that room was occupied the week before for over a week and that guest had no issues; I messaged him immediately so he can be on the lookout.

My supposition is that she may have brought a bug in from outside and it landed in my room.

Hard to prove. I'm stuck with the bill for decontamination.

Anyway, she got a full refund for the room from airbnb even though she was close to the end of her 9 day stay.

But airbnb refunded my cost of the initial professional inspection.

That's how they found one solitary bedbug.

That's the cost of doing business I guess.