I think I am in the process of hosting my nightmare guest....and unfortunately it is a 9 night reservation.

The booking message was OK except the guests profile says he  joined Airbnb in 2019 stating he resides in Adelaide South Australia. But his message says that he resides in New Zealand, and has for some considerable years. No other red flags though.

On arrival I realised, I had nothing in common with this guest, we were from different planets. You can tell just by that couple of opening sentences what the experience is going to be like....there was absolutely no level of empathy there for me! He looked through the cottage without bringing in his wife/partner and appeared to be not the slightest bit interested in what I was saying, walking away to look at something else while I was explaining aspects of what I offer, and what I don't.

After a few hours he came up to me and said, "the TV doesn't work"! I went in and switched it on to find out he had accessed analogue function which is not used in Australia, as soon as I switched to source and digital the TV worked fine. His comment was, "Could not have handled 9 days without a TV"! To him, It wasn't his fault, it was the TV's!

I have lost track of the number of people who have come and gone over the past few days, but the thing that has me so worked up.....the weather has been beautiful here for the past week! Daytime temps in the upper 20s and nighttime around 20c.... The air-conditioning would potentially have run nonstop since they have been here. They leave at 8.30 in the morning and return at midnight, they leave the air con running when they depart. Fortunately I have a sensor override that turns the Aircon off 8 minutes after they walk out the front gate, so that problem is solved but, they run it through every night until the sensor turns it off when they leave the next day. They are totally thoughtless energy vandals, they are using the facility because it is there, not because they need it. The poor Air con which is set on 'Auto' is rocking between heating and cooling all night long!

I still don't know what her name is....this afternoon Ade was working in the garden when they came back and she introduced herself deliberately to the both of them. He said....."I met you yesterday, remember"! and that was it, made no attempt to introduce her.

I am feeling uncomfortable, they have taken over the garden, cigarette smoking like it is going out of style. I got permission from them to service the cottage today. change the linens, vacuum and mop, new towels, replace condiments. I was faced with a challenging sight!

Half way through the stay  and I can truly stay I can't wait for this one to finish.....and that is sad, all those wonderful guests I have had I won't remember down the track, but I will remember this one though. Such a pity, I would have liked this one to be one of those high notes as we are off away for three weeks after this.

It had to happen sooner or later.....I guess this is, later!

Sorry,  just needed to get it off my chest!

@Robin4 I sympathise, & understand exactly how you feel. But when you wrote 'nightmare guest' I was fearing you'd had the place smashed up, like all those poor hosts in the US. So to find your guests were entitled, with appalling social skills was a bit of a relief! - Don't get me wrong, it's not good that the original Airbnb 'caring, sharing' has morphed into this.

I had a one-nighter last week, no photo - they never 'get it'! - booked, only message 'working at hospital', then he phoned to TELL me he'd be arriving 11.30pm.  (Last check in 10pm) - I always allow doctors & nurses funny times, but expect them to ASK & negotiate before booking - not TELL. Said he'd call round 1pm before to pick up key! I said 'No'! - That would have been an early check in! (Check in 5-10pm) So he arrived, 11.45pm, I showed him kitchen & help yourself breakfast, bathroom, whereabouts of key to let himself out next morning... he looked irritated & completely not interested in all my basic instructions, ZERO talk from him, no pleasantries even.  Review was ' Nice & clean, will book again' Yet 4* overall & 4* for accuracy, location & cleanliness - despite clicking the 'sparkling clean' 'outstanding hospitality' & 'thoughtful touches'! - 4* for value - on a £20 room!  5* communication & check in.

He HAS booked again - 5 nights, day after tomorrow. (Value not THAT bad then!) I pm-ed a brief & polite expression of disappointment with the ratings, with explanation, & suggested he upload a photo for openness & transparency. IF he shows willing to communicate on his 5 stay, I'll educate him on the Airbnb origins,ways, culture, NOT a hotel! - Gotta catch 'em first tho', eh?!

I'M FINDING I GET MORE & MORE GUESTS LIKE THIS.

You may find out he turns out to be a wonderful guest Helen!

It has been my experience that those who book again feel comfortable they made the right decision first time around.

Helen I feel somewhat pushed into a hole here because my next guest is a woman who has just lost her son and is in need of some sabbatical therapy.......she is not ready to just yet return home to her demons.

We had a nice meeting today, she has loved what she has seen, she is so enthusiastic about filling in the large  blanks I have left on my latest mosaic. I felt giving her a creative task to take her mind off herself maybe good therapy.

I haven't told her yet Helen, but that mosaic is hers, I want it to be a reminder that in our darkest hours we are capable of something memorable!

I didn't really want to go away with a poor experience behind me, it just creates the 'what if' thoughts!

This current one is just not a hosting I would have preferred to have had just now!

@Robin4 Let's hope Mrs & Mrs No Manners leave cottage fit for the lady who needs a haven. (Remember your post.) Mosaic sounds good... (I was an Occupational Therapist a lo-oong time ago, before Airbnb & before Adelaide ex-husband.) 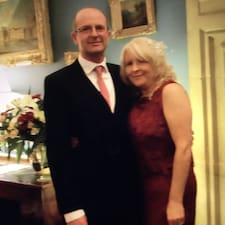 Put you prices up to keep the riffraff away.

@Ian611  Are you under the impression that rude people don't have money?

@Ian611 If I put my prices up I'd be overcharging, (shared bathroom, two other letting rooms), my value ratings would go down & maybe my overall rating.... Perusing my neighbours' listings shows most of them have had no or one or two reviews = bookings over the winter. Reviews suggest I have more bookings than any other listings in my town/area... No doubt because I'm the cheapest. Mr 4*-value-for-a-£20-room is a doctor, for heavens sake! Not most people's idea of riff-raff!  (I have my theory as to why he expects more for less, but some things are indelicate to mention!) He's back again now, I said on day 1 of 5, Did he realise Airbnbs were not like 'normal' B&Bs? He said 'Not when he booked, but between visits has done some research, read up on history.' Then he disappeared with his meal to his room, saying he probably would not see me for the rest of his stay.

I'm lucky that I usually get GOOD low budget folks - nurses, who would not locum here if they had to pay more, nice YOUNG tourists, students on low budgets. We in the UK seem blessed not to attract the 'trailer-trash ' sort that U.S. hosts complain of... at least  not outside the big cities. :)

I feel for you, @Robin4, having had some of these types before. It's the wanting to 'scream inside'  that rattles me the most, but I smile and wave as their behaviours eat me up.

I've had a lucky run these last few weeks; a bald, fifty-something gay guy who left the place immaculate (and hair-free). A self-confessed menopausal women who refuses to have the heating on (and has the window open, despite it being winter here) has booked three days a week for the next four months. And storm Ciara (happening as I type) has meant tonight's guest who told me he was going to check at 11pm, (despite a 10pm curfew) is stranded in New York.

....... for some, @Branka-and-Silvia0 , not for all. Some see it as much as a social experience. I guess hosts who host in their own homes/annexes think differently from pure 'businesses' off site?

@Helen350  yes, I know, this was the initial idea.... but guests changed, Airbnb changed... everything changed lately and now it's much easier if you look at it as just business. Otherwise, we would burn out a long time ago ... 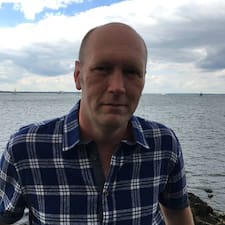 I get both reasons - social and business - but we can't be sure that hosts and guests will be socially compatible at the time they book - sometimes will, sometimes won't.  I think in time, those who want social compatibility with their guests should probably switch to HomeAway where they can add a video to introduce themselves and their desire to have friendly guests.

For me, I am way too busy to socialise with guests. I rarely meet them. They come, they go, the money is in the bank. We clean, we tidy, we change the beds, and the cycle repeats through the year.

I haven't "become friends" with any guests - and no intention of doing so. I might make an exception for a sexy rich widow with private jet and her own private Caribbean island. Not sure anyone like that would stay in my holiday homes though .....

@Trevor168  I do socialize with most of my guests and I can tell you that I don't need to switch to a different platform to get guests who are friendly and understand the concept of home-sharing. All of my guests, since I started hosting over 3 years ago, have been socially compatible.

Who knows? If a rich lady with private jet and her own private Caribbean island have a fetiish for the hosts from the Isle of Wight, you have great chances that this dream comes true. I wish you good luck! :)

Now come on Branka, you are making yourself as bad as Airbnb. And you aren't, I know you aren't!

Airbnb may have changed.....but I haven't, I love doing what I do now just as much as I did 400 guests ago. It's not a business, it's a lifestyle.

I have just hit a little speed-hump on the wonderful highway of hosting!

I am prepared for a poor review here, I have never had below an overall 4 before but....records are made to be broken!