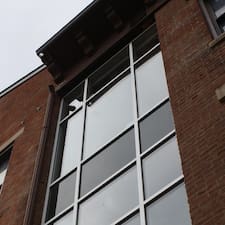 Airbnb does everything possible to deny Hosts' ability to fine Guests for damages and disrespectfully blatant house rule violations. I am truly fed up. Although it is unfortunately not charged upfront like it should be, similar to incidentals for hotels, I always envisioned that Hosts could easily charge up to the security deposit amount upon adequate proof of damage and/or house rule violations, with the "Host Guarantee" serving as a safety net should damages ever exceed the security deposit. This is all a part of the illusion, to make Hosts feel protected, when they're really not. Airbnb intentionally makes the process difficult to actually charge a Guest's security deposit. Even when successful, the deserved amount is rarely awarded, as Airbnb often instead negotiates/decides (with no logic) a fraction of what is truly owed.

I am a SuperHost with a 4brm 2.5bath with a standard guest quantity limit of 8 people, extendable up to 10 people for $25/night/additional guest, which is an available pricing setting.  With keyless access becoming increasing popular, guests are now very very comfortable blatantly inputting incorrect guest quantity information for "Entire Home" reservations, in order avoid paying the additional cost for additional guests, and assume they'll just never get caught. I repeatedly experienced this deceit. In my house rules I state that if caught breaking the occupancy limit during a stay, Guests would pay a fine of double ($50/night/additional guest) in hopes of simply incentivizing Guests to reconsider lying and just be honest upfront. Also, I invested in a security system consisting of several exterior cameras, so that providing evidence to Airbnb of violations would be simple. Guests lie, Hosts lie, video doesn’t.

I had a guest book my listing, input 8 for the guest quantity, however they showed up with literally double that (16) people checking into the property. It was clear as day via the security footage. I followed all of Airbnb's steps in the Resolution Center process, starting with filing the claim. The Guest simply did not respond, so after waiting the mandatory 72hrs, I escalated it to Airbnb. After much back and forth with multiple different Airbnb ambassadors/representatives, Airbnb essentially stated **. Why would any guest, who knowingly and intentionally broke a rule to save $, ever give their permission to be charged for it? It makes absolutely no sense. If that's Airbnb's stance, what the heck kind of incentive does any guest have to follow any your House Rules?? NONE!!!! I was furious. However, near the end of the phone call, the Airbnb Support representative could tell I was rightfully frustrated and left me with a final piece of advice, which seemed like a little known gem for how experienced Hosts avoid similar outcomes. He told me to include a clause in my house rules stating something along the lines of "Upon booking, Guest authorizes Airbnb to charge the listed violation fines without additional consent, following receipt of sufficient evidence from the Host". It seemed that since every Guest must accept the house rules upon booking, they are also accepting this clause, which then gives Airbnb the legal backbone to charge them without addition consent. I quickly adjusted my house rules to reflect the advice, after all it was coming directly from an expert Airbnb representative.

Fast-forward a month later. Another guest blatantly breaks a house rule -- No pets. Not only by default did this guest agree to the house rules (and newly included clause) upon booking, but since their profile appeared to be a brand new user with no reviews, I prompted them to first confirm that they had thoroughly reviewed the house rules prior to me even considering their booking request. The Guest politely confirmed, responding in writing via Airbnb messaging, stating "I have thoroughly read the list of House Rules and will be absolutely sure to respect every rule listed". Can't get much clearer than that, huh? So, I approved the booking. This guest showed up with not just 1, but 2 dogs to the property. Once again, clear as day, on my exterior security cameras. The Guest also caused severe damages to linens, broken glassware, and a stolen item.

Immediately following check-out, I reached out to Airbnb and informed them. They told me my case was assigned to a case manager who'd be reaching out. Of course they didn't actually reach out, so 72 hours later I followed-up. I finally hear back, and get a request to upload evidence, which I did. Also, per Airbnb's request, I submitted a resolution center case and again waited the 72hrs of the Guest simply not responding, prior to escalating it to Airbnb. After another week or so of follow-ups while the case juggled between multiple Airbnb ambassadors, end result -- CASE 100% DENIED. I am outraged once again.

Although I reached out within 24hrs of check-out, notifying Airbnb of exactly what happened and ready to provide proof, Airbnb took 4 days to respond, and didn’t direct me to still file a resolution center case until after my next Guest had checked-in. Airbnb denied the damages portion of the claim based on that fact, which clearly involved their own poor response time. The ridiculously timeline of events was as follows:

Tuesday (morning) - Host reached out to Airbnb Support and informed them of exactly what violations happened. Airbnb: **

As for the House Rule violations portion of my claim, an ambassador followed-up via phone on the denial of that as well and confirmed **. So, here we are right back at square one. Essentially, you may not realize it, but your House Rules are truly worthless. As far as Airbnb is concerned, they're actually more so RECOMMENDATIONS than rules. This ambassador gave a different final recommendation than the last, stating to submit a resolution center request for every reservation requesting an upfront "House Rules" refundable deposit due prior to check-in. I made sure to get this recommendation in writing, since obviously the last recommendation didn’t pan out well. This seems like a very tedious practice to do for EVERY reservation just to be truly protected, so I am thinking about creating some sort of criteria, such as a minimum # of prior reviews in order to allow Guests to bypass this new protection measure that I clearly need to implement. At least potential Guests with prior reviews have some skin in the game via something to lose. I'd be grateful to hear if any other Hosts have found any different solutions for this?

AGAIN, Hosts protect yourselves before something gets out of hand, and make sure to get everything from Airbnb in writing! Airbnb will not help you.

Sidenote: I recently won an unrelated arbitration case (Covid-19/ECP Cancelations) already against Airbnb, so I am heavily considering sticking it to them again over this situation via the same method.

**[Conversation with CS removed in line with Community Center Guidelines]

Re: Security Deposit, House Rules, and Host Guarantee all a complete joke

Only 2 things you can expect from Airbnb: Bookings and reviews. Neither are guaranteed to be ideal. Some will be a disaster.

Your only defence is prevention, and that's entirely >your< problem.

Look carefully at who is booking. If it smells funny, bin it. If it's not a good fit, tell them so. If you use Instant book, turn on every restriction. This tends to weed out the worst of them, and gives you the opportunity to ask questions of those who don't qualify.

Your chances of receiving any useful help from Airbnb "after the fact" are slim. Their outsourced support has other things to worry about. They'll get your complaint off their desk as quickly as possible. Easiest way to do that is to say no and close the ticket. Done and dusted. Next...

Forget Airbnb support. Watch your own back.