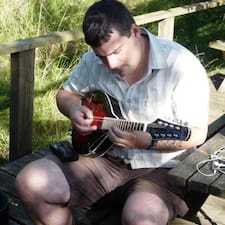 We have two rooms in our house that we use for AirBnB, we took a break from it last year because one room was being used as an office and we'd also started out with Airbnb Experiences and didn't want to over-stretch ourselves. This year we decided to open them back up again but decided that we'd keep both rooms as single occupancy based on feedback from guests. The upstairs room is pretty small and the downstairs room only has a single bed although it does have an en-suite.

The other reason for sticking with single rooms was that it feels a little less hectic and we felt we'd be giving a better experience overall by hosting rooms that were comfortable for our guests.

The difficulty we're facing at the moment is the sheer volume of chancers booking the room and then saying, 'by the way there's going to be two of us coming' and thinking that's ok. I get why they do it, it's cheaper for a start, if it was a double we would charge more, but it is a little frustrating because the rooms are clearly marked as one person only.

How do you manage this? We're seriously considering turning off the instant book option but I worry that might put people off from booking. At the moment I have a reservation with this issue again and I've asked her to cancel because I don't want to be penalised for it.

One of the best perks with IB is host cancellation free of penalty.  If you have a booking with a message that there will be more than one person in the room, contact Air BNB and have them cancel the reservation.  Super easy.

You do have a couple of  reviews that indicate more than one person was acceptable on the reservation.  This could be sending mixed messages to potential guests.

Have you considered a third listing that allows 2 guest parties to book both rooms?  That might be an option that meets your guest needs.  Just a thought.

Thanks, that'll be reviews from over a year ago when we first started up with two people per room.

We had thought about adding the extra listing and we'll look into that over the next wee while to see how things go.

I've seen hosts do the solo traveler thing really well, but they almost always have it boldy in the title or very first thing in the description:

I'd add a line like this to the very top of your description: "SOLO TRAVELERS ONLY: We do not accept bookings for more than one person per room."

As Linda said, you can cancel penalty-free, just select the "violating house rules" option or call Airbnb to ensure you aren't penalized.

@Toby56  I also only host single travelers in my one guest room with ensuite bath. I do say "For Solo Travelers" as part of my listing heading. Most guests have found that clear, but I still get the occasional Inquiry asking "So is it just for one person?". Duh. These are all from quite young looking people, and new to Airbnb. I've never used IB, so it's easier for me to head off inappropriate Inquiries or Requests before the guest books.

But I also re-iterate the solo guest only in a message when I get a Request to Book. "Just want to make sure you thoroughly read the listing decsription and understand that the room is for 1 guest only."

I did have one young woman book for 1, show up alone, then emerge from her room the next morning with a guy. Turned out he was her boyfriend who had been away working out of the country- they had a plan to meet up here, but he was hitchhiking and she didn't know when he'd turn up. When I told her she booked for one and I only host 1 guest at a time, she looked so shocked and crestfallen that it was obvious she was really unaware that this wouldn't be okay (she also introduced him quite openly to me right away, it wasn't like she was trying to sneak him in or out)- she was new to Airbnb and figured if she was willing to share the single bed, it would be fine.

As they were both very sweet and obviously weren't trying to pull a scam, I just let him stay, charged them a bit more, and let it go.

Hasn't happened again, but as I say, I now message guests for confirmation that they understand the "Solo guest".

You are such a softie!!  Somehow I am not surprised.  I love that as hosts we can always be human. 😄

@Linda108  They were so sweet and so much in love. They hadn't seen each other for 6 months, and rarely emerged from their room until noon, but were really quiet about whatever fun they were having in there. He made them breakfast (or one might call it brunch) every morning and always offered me to eat with them. They took long walks and went out dancing (but not drinking). She left a one line review- "I spent one of the best weeks of my life here."

I also have a single occupancy private room in my home. My listing title includes the words "1 guest" and it's mentioned several times that my listing is single occupancy, the guest room has a single bed and therefore only 1 GUEST can stay. When I get guest inquiries/bookings, the very first thing I always reiterate is that my listing is for 1 guest only and I strictly do not allow the Airbnb guest to bring visitors/guests/family/friends into my home at any time during their stay.

Thanks all, that's been really helpful. We've made a couple of tweaks to the descriptions and we'll stick with IB for now.