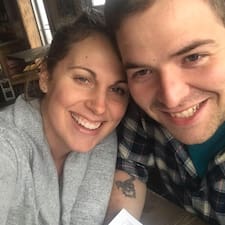 Yes, I can see their logic. Nonetheless, it's flawed, as there's no effective or guaranteed means of holding the guest to account, by Airbnb's own definition. And in practice... Well, you already know.

So, we're left with having to take control of it ourselves. And it's been very effective so far. And without Airbnb's "help".

Our last guest who was required to pay a deposit checked out yesterday. Despite about 30€ in damages, they received their deposit in full.

Why? It was a group of seven 20 year old males. Very high risk. But they left the house in excellent condition, after having paid over 4500€ in total (including Airbnb commissions and tourist taxes, not including the hefty security deposit).

Yes, they partied all night long most nights (amongst themselves - we have logs of the in/out traffic, and what energy they're consuming 24 hours per day which was large), they broke a few minor things, but considering their overall contribution, I just chalk it up to the cost of doing business.

However, had I not imposed the deposit, it's all but a certainty that these boys would have absolutely no motivation to avoid damage or bother to clean at all. But they did. And that validates the whole method.

I suspect some hosts file damage claims against their "host guarantee" for the equivalent of 30€. Probably get it paid, too. But that just bogs down the system and invites host-guest contention. Hardly worth it.

So, it works, despite Airbnb. They haven't written a review yet, but I expect something from them after I write my review of them, which will be good. Theirs will very likely be 5* across the board. They were really, genuinely delighted with everything and are already making plans to return.

Everybody wins, everybody happy.

So, go ahead; penalise me for that 😉

Yeah Elaine you have a great property and you are a good professional host, and the thing I like is, you work to a business plan......so many don't, they just try to cut each others throats to be cheapest in the area and end up running the platform into disrepute.

I was just interested in the security deposit thing because I know where the company comes from here.

Obviously you have got it to work for you and I think that is great!

If someone doesn't want to pay your deposit before their stay....... you don't want them as guests. If they do agree to pay it, they will be good respectful guests and you will give them a bit of latitude.

This is great, life is about compromises and you look as though you have struck that balance.

As long as Airbnb are happy with that, it's a win/win all round....and I do have to understand Airbnb are evolving all the time! Their strategy back in 2017 is different from what it is now. It is possible that what you are saying about them not wanting to be involved with security deposits may be correct....it takes a problem off their shoulders.

We've just made a lot of mistakes and learned what not to do. I hope others can benefit from that

One of the latest stark realisations was not to buy into Airbnb rhetoric, and to avoid any further dependence on them. As they've evolved, they no longer can be what they claim anymore. It's just a business. Much like your internet provider.

@Robin4   I am not sure but I think I've heard that hotels and resorts are allowed to collect the security deposits outside Airbnb. Do you know something about it?

you just wrote the essential :

.... had I not imposed the deposit, it's all but a certainty that these boys would have absolutely no motivation to avoid damage or bother to clean at all....

Of course!  By not taking deposit and ID verification from guests Airbnb is encouraging and attracting the worst guests and behavior. If these 2 things are in place then 95% of all problems with Airbnb wouldn't even occur and Airbnb wouldn't be banned in so many countries and cities around the world.

I don't know if Airbnb "ruined it". But I suspect they'll eventually have to rethink.

Also, there's no reason to impose a deposit burden on a nice family with a long history of good reviews. So, it's essential to be able to impose it at your discretion.

It's not any more "discrimination" than having a "no pets" or "no children" rule. And it's rather self-regulating. If the guest doesn't agree, you lose the booking. If they agree, then it's an amiable agreement. The host does need to be fair and wise about what constitutes "damage". But being unreasonable also has repercussions.

We are now listed with another firm, who does indeed allow security deposits "at host discretion". But they also have rules about it. Quite sensible ones, too.

Ok, enough said on this topic, but I'll reserve the right to rant on another thread where hosts have been skewered by guests.

Thanks all, for putting up with me. 😎

I look at Airbnb like the Mafia - if you are a good 'earner' and low maintenance, you get to do your own thing especially if everyone is happy. Especially if the listing is not in the U.S. where everything is subject to review through a string of silly lenses.