RIP to a beloved pet

Thank you @Debra300 and @Sarah977 for your kind words.  Our fierce little Papillon, Ben Ben, was 16 years old and weighed less than 5 pounds when he died peacefully in his sleep this evening.  He was with me and my oldest daughter, his favorite person in the world, at our Airbnb in Maine, his favorite place.

Because he lived here, I've always let people bring their dogs.  Although I tell guests about the wild animals in the woods - bears, coyotes, fishers, moose, bobcats - so they'll be mindful of letting their pets run off, I don't tell them that Ben Ben always ran fearlessly into the dark night to chase off any being he felt came too close to the house.  My heart would be in my throat, but he always came back with an air of satisfaction at having conquered another foe.

Here's a recent picture of him curled up asleep in Maine - I hope you'll post pictures of yours. 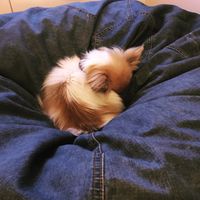 My heart goes out to you @Ann72. I know exactly how you're feeling right now. Sending you a hug.

Your telling of how Ben Ben would run off into the dark to chase off foes made me laugh. I think it tends to be true that the smaller the dog, the fiercer and more dominant they tend to be! Our Bernese mountain dog was 10 times the size of our cat, and yet the cat would deliberately sit by the the dog's food station and not 'let' her eat, lol. Although give her her due, she wouldn't hesitate to take off into the dark after an interloper, too!

We lost her last November, at only 10 years old.

@Colleen253  Thank you soooo much - that means a LOT, and I'm so sorry you lost her last year.  Too soon and too recent.  I LOVE the picture of the cat ruling the roost though - hilarious and so on-brand for cats lol.  Thanks for the hug and sending one back.

I think it tends to be true that the smaller the dog, the fiercer and more dominant they tend to be!

I call this the Napoleon complex and it exists! My friend's boston terrier will often try to compete with Golden retrievers, Labradors, Rotties etc- he would run around them barking but never bite and was never off leash for this very reason.

I am so sorry for your loss @Colleen253, no matter how much time passes, the pain eases but does not disappear. ❤️

@Ann72  He had a marvelous life with you, I'm sure, and lived about as long as we expect dogs to, although of course it's a terribly sad day for you. And it's so great that he got to run around in the woods, rather than being one of those dogs that's cooped up in an apartment all day, only getting walked around the block a couple times a day.

My 70 pound dog (of unknown breed, as she just appeared at my house at the age of about 5 months, but probably a Jindo, or a white shepherd/ Akita cross) is an alpha female, and though she's calmed down a lot in her old age, she used to be terrible for terrorizing other females. She'd get them on their backs and stand over them with her teeth bared, and you expected to see blood and fur flying, but she never really hurt them and never bit- it was just a big show of dominance.

However, you should have seen her cower and slink away if she tried to pull that on a little toughie like your Ben Ben. Especially chihuahuas. All they have to do is yap ferociously at her and suddenly all her alpha-ness just evaporates and she goes " Okay, okay, I didn't mean anything by it, I'm outta here".

@Sarah977  Your dog sounds beautiful!  To be clear, Ben Ben was a city dog - he only visited Maine - but although he lived in an apartment for the last 6 years, with 5 walks a day, he spent the first 10 years of his life in a Brooklyn brownstone next to a 500-acre park where he would walk for about a mile and a half every morning.  In the city his walks had gotten shorter in the last year because he was pretty much blind, but I learned that if I swung the leash gently he could follow along pretty well.  He would stop dead when he wanted me to pick him up, and squirm like mad when he wanted me to put him down.  They're very communicative beings, aren't they?  🙂

@Ann72  Ah, but at least he got to visit Maine and be out in the bush and chase the wild animals away. Some dogs never experience anything wilder than a city park their entire lives.

Your comment about them trying to train us- one night my dog was barking her head off in the yard (where I live that could be because of a horse, a cow, a person, another dog, a possum, who knows ) and I got up and yelled down to her to hush up. She turned around and looked up at me with this expression on her face that made me immediately picture her thought balloon- "You want me to stop  barking? But don't you hear that? Why aren't you  barking?"

They must think we're bark-challenged, therefore they have to do all our barking for us.

Thinking of you @Ann72, good that Ben Ben went so peacefully ❤️

I still sometimes miss our family dog from childhood, William - he was a golden retriever and was very tolerant of me even though I arrived after him. He once managed to help himself to my birthday cake, which had been carefully hidden away in a closed room... 🐶

We also looked after our family friends' dog, Derek, a few times. We once returned home to find that he had mischievously climbed out the window onto our little porch roof, and was just sitting there, sunning himself, waiting for us to come home. 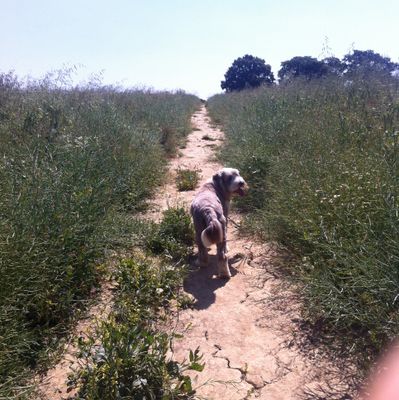 Derek - you can almost see him thinking 'come on, hurry up!''

Which amenities are most in-demand at your listing?

@Katie  Thank you, Katie - and William sounds extreeeeeeeeeeemely clever!  Don't you think they're really just trying to train us most of the time, like Derek telling you all how to take a proper walk?

@Ann72 I 100% agree - they can sense things far more easily than humans too, very clever beings and excellent companions!

Which amenities are most in-demand at your listing?

" Think of him as living in the hearts of those he touched. For nothing loved is every lost; and he was so incredibly loved"

I am so very sorry for loss. Will be sending so much love and hope for peace of mind and heart your way. ❤️

So sorry to hear about Ben Ben. I know I will be completely devastated when one of my cats passes away but I hope they live a long and happy life like him.

My Grigio is also an excellent guard cat. He will keep watch at the garden door for hours if he thinks there is anything suspicious out there and chases off intruders, including foxes, without hesitation. I do worry about him sometimes, but he always trundles back unhurt and looking quite pleased with himself.