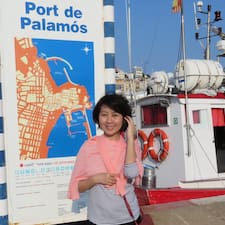 Here is an interesting case about another bad guest that we recently had.

He booked our place for one night, basically to spend the night with his young girlfriend ...

He initially played the nice guy in his communication. But after we asked him copies of his passport and his gf's ID, according to our House Rules, no more answers. Sending a reminder had no effect.

He didn't confirm his check-in time, and on his arrival day, made me come in early afternoon for nothing, because he didn't contact us before 7pm, when I had already gone home. He had no choice if he wanted to check in, so he finally sent us the documents that we required, before I made the journey again only to check him in. Of course, his girlfriend wasn't present ...

The day after, I happened to meet them before check-out, so she seemed to be his real girlfriend. So that's not the point.

We sent him a money request to compensate the time and extra money I had to spend to come twice to check him in.

He refused, saying that he shouldn't have to pay for late check-in.

We texted him to explain that he could have behaved better, he didn't reply either.

Instead, he sent a review a few days later. We assumed that it would be dishonest, so we waited a bit to review him, in order not to compromise new bookings. But when we finally wrote the blasting review that he deserved, we were surprised to see that it got published without his review being published.

So what we understand is that Airbnb decided to defend us. We have an almost perfect track record of hosts.

It probably weighs against immature and insolent youngsters, and it's good to know.

We read so many stories about hosts who didn't dare to review bad guests for fear of retaliation.

If you have evidence of the guest breaking your rules, specially through the Airbnb messaging, you shouldn't worry too much.

Bad guests bury themselves by ignoring your requests. Just make sure you have written rules to match their wrongdoings.