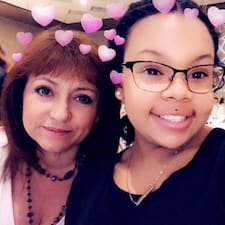 I had a cancellation by AIRBNB  just yesterday saying it was due to quality assurance information they received regarding the guest.  I was totally fine with that, they are looking out for the host. Here is where the problem started a few hours after that I received a booking for the same dates, same amount of quest, same location the only difference was that this one was booked by a male not a female.  I called Airbnb and shared all of this information with them and my concerns that this booking was tied to the other booking that they just cancelled. They looked into it and said that it was just coincidence, but if I wanted to cancel I could and there would be fees and so on and so on.  I just called them back, because I looked up the guest number on the new reservation and it belongs to the female that they cancelled the reservation. And this is what they told me THAT DOESN'T MEAN THAT THEY ARE LINKED IN ANYWAY, IF I WANT TO CANCEL I CAN AND IT WILL EFFECT MY RATING AND I WILL PAY A  FINED. Are you kidding me they are not linked, they will not let me speak to a supervisor.

Has anyone been able to speak to a supervisor at Airbnb?

I do agree wholeheartedly @Sarah977, and it would be an absolute dream for IB to be abolished altogether, but with ultimately pushing all hosts on to IB being the Holy Grail for Airbnb (as they've openly clarified many times themselves), sadly, that will never happen.

So for those of us who completely disappear from the search rankings when we attempt to go IB-free, there's unfortunately very little we can do but grin and bear it.

I have to agree with @Super47

I can confirm from my personal experience that using IB or not does affect bookings and significantly in a market as saturated as London. I started off not using IB with no problems at all. Then suddenly Airbnb really started to push IB, my listings dropped so far down the search results that my bookings pretty much stopped completely. Also, who knows how many guests were inadvertently searching with the IB only box ticked and therefore never seeing my listing at all?

Reluctantly, I switched IB back on again and hey presto, the bookings flooded in. The thing is, the vast majority of my bookings are not IB but via requests, partly because I have all the extra requirements ticked for IB, but largely because most of my guests prefer to have some correspondence first. However, I needed IB for those guests to even see my listings.

I am talking about a couple of years ago, so who knows if things have changed and I would now get the same number of bookings with IB switched off, but it's not something I want to experiment with right now after such a dire year.

Also, I haven't found IB bookings to be more problematic than request bookings. There are good and bad guests who use either method. The advantage is that you do have three penalty free cancellations so it's much easier to cancel an IB guest if red flags start popping up after the booking is made.

However I think places like London or New York and other major capital cities are the exception rather than the rule.

Yes, I am sure that is true. Unfortunately, I found in London that I had no choice but to turn on IB once Airbnb started to heavily push in this direction. Fortunately, the experience has been so much better than I expected (I was totally against using IB in the beginning and turned it on reluctantly with much trepidation). However, I do think that is largely influenced by the fact that I am a live in host, vet guests (IB or not) fairly carefully, cancelling those that seem obviously problematic, and host mostly long-term guests who rarely IB anyway. I can see it would be more difficult to manage for remote hosts with high turn arounds.

I have always used Instant booking, because I also have my listings on other platforms, and do not have the ability to review and communicate with them before they book.  Like @Huma0, I have everything checked under guest requirements and reservation preferences.  So, I still have to receive booking requests from new Airbnb members, anyone that wants to book less than three days before arrival, or for longer than my maximum night stay limit.  I think these steps give me an opportunity to screen guests and still keep IB enabled.  If I were @Mary4101 situation, I'd just use one of my "safety" cancellations.

@Debra300  I know IB works fine for many hosts, they like it, and there's no reason not to use it if a host doesn't find it a hassle re getting inappropriate bookings, or like me, wants to have more control over who books beyond a few guest requirements and verified ID. I'm not suggesting that hosts who don't experience issues with it and are good at vetting guests stop using it, as what works for hosts is very individual.

It's the hosts who seem to have no end of issues with IB guests, find they are attracting partiers, or guests who don't bother to read the listing, or are bad communicators who never answer messages who I would suggest turn off IB to see whether guests having to send a request makes a difference to the type of guests they are getting. And also new hosts who may be really green about vetting procedures and how to handle getting an IB that just doesn't sound okay. Since new hosts get a boost in search ranking for awhile anyway, they could start with no IB to get the hang of vetting guests, sending appropriate messages, etc. and turn on IB when they feel confident that they know the ropes.

A lot of new hosts don't even realize that IB is turned on by default when you first list and then are shocked and upset and confused that they got a booking they weren't given a chance to approve.

Understood.  I shared the options that I have selected, because there are hosts who prefer IB, but may need to change some of their criteria to help them weed out guests that may not be a good fit for their listings.

I would certainly agree that a newbie host should probably not start off using IB and then, if they do decide to do so, after a bit of experience, click all the restrictions they can. I find that these restrictions help a lot in that many guests aren't able to IB with me, which is fine, as I'm not using IB to get quicker bookings but to maintain my ranking in the search listings.