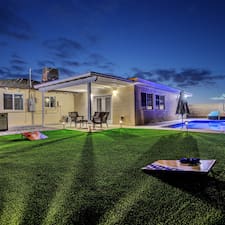 I am a super host with two properties listed under my account both with 4.8+ review. I had a guest who violated the number of guest and house rules by throwing party at place, I received complains from neighbors about party, 15+ cars parked in the street etc. I have restricted rules set up for no party and gathering more than number of people declared, communicated to guest and received acknowledgment. This guest declared 4 people but brought 30+ people and threw a Halloween party. I called guest asked them to stop, they did not listen. I called police and Airbnb both and reported the case. Asked Airbnb this guest is violating the house rules and I want their help and reservation to be canceled. I sent police to give them warning to stop the party. Police went there and asked guest to vacate extra guests, there is a police report on 30+ guest being there. Police told me technically since there is no crime, and not much noise when they arrived, there is not much they can do and this is a civil case and need to be resolved between Airbnb and you.

Next day I received an email from Airbnb that my account is suspended because of report of party they received, even though I was the one that reported that and asking them for help. The suspended my other property too under same account. They are supposed to call me today. But I was wondering if anyone can help me on this? In my side, I did everything right and followed the rules but at the end I am the only one getting penalized without violating any rules. Airbnb threaten to cancel my upcoming reservations as well.

How long do you think this would take to resolve? Can I list my properties under different  host account of mine gets permanently suspended? Thanks a lot for your help. I’m very frustrated about this

Other cases in this community show, after investigation with positive outcome for the host, a temporary suspension is undone in about 1 week.

Your listings are (temporary) not available in the search system.

Thank you so much for your response. I will talk to them tonight, so it seems there is a chance I could defend this. But hypothetically and by any chance if I cannot convince them, would I be able to list my properties under different account? In other word, is the property going to be banned as well? Or only account owner?

@Alex8276 It's possible (quite likely actually) someone in your community reported the party to Airbnb, and that's what triggered your listing suspension, not you contacting Airbnb. Hopefully the suspension won' t last long. All you can do is wait.

Thanks for response. I guess I will find out after talking to them. I’m still puzzled, why host should be the one to get penalized here? I set restricted and clear rules and took necessary actions upon violation, and asked authority’s and Airbnb’s help, but instead I got penalized for it

@Alex8276 It's noted in the party and events policy.

"If we receive reports that a listing is disrupting the surrounding community, we may request that the Host update their rules or suspend the listing."