And Now For Something Fun

I came home today to find that my guests had hidden a weeks worth of disgusting garbage in the back of the cupboard under the kitchen counter. It's something I'd of never thought to look for, if I hadn't had two guests in the past do the same thing. And it has me wondering what other strange behaviours you've seen in people that you would never think of? It can be funny, disgusting, irritating, or just plain old interesting.

To kick this off, I'm genuinely surprised at how many people share a bath towel with their significant other. I mean, I love my girlfriend, and we probably already share the same germs. But still, I like my own towel.

I've also had guests (on vacation) bring (and leave behind) their own pots and pans.

A germophobic doctor who wiped down the entire suite with a surgical disinfectant (and stained the bed sheets with it). I felt like I needed a Hazmat suit because of all the chemical cleaners he left behind. For a moment I considered the possibility that he had gone Full Dexter in my basement.

A woman on vacation from Ireland, who spent the entire two weeks indoors watching TV because she was afraid to drive on the wrong side of the road, and didn't want to take the bus.

I'm kinda surprised at how many men sit to pee. At least that's the only reason I can think of for the rim of the toilet being completely spotless upon departure.

Lastly, it's not so much a behavior, but I'm very surprised to see just how much hair women shed. Men don't seem to shed nearly as much, regardless hair length. Whereas women with both long and short hair seem to leave hair EVERYWHERE!! I often have to take a lint roller to the sheets AFTER I wash them, to get the hair out! I'm personally convinced that it's because women are far more likely to use harsh chemical hair dyes.

What say you? What strange behaviours have you observed. 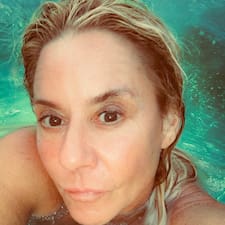 Thanks for the tip! Have been perplexed at the hair left on sheets after being washed and dried. Will now try a lint brush.

But the dark hairs are much easier to see :-)- the light colored ones can get missed when cleaning.

Haha..... I'm guilty of shedding a ton of long, dark hair..... I use a dust buster and lint roller regularly to clean up after myself 🙂 but my hair still falls out and ends up everywhere and it kinda drives Henry crazy! I often joke I'm surprised I'm not bald with all the hair loss.

We give our sheets a good strong shake out before washing them, and we air dry our sheets so most remaining loose hairs fall off by then.

About guest behaviors......my most recent guest did these teeny tiny loads of laundry every 3~4 days always setting the washer at full load (ours is a 16kg top load washer) for the entire 4 months he was with us. He kept apologizing claiming he ran out of clothes..... but I had a pretty good idea of the amount of clothes he brought so I know he was lying AND  why wash only 3 pairs of undies, 2 pairs of socks and 2 tee shirts in one load leaving a pile of unwashed items only to wash them 3 days later!?!?!? Nothing we said or did was able to get him to wash larger loads or at least set the washer to "small" load. He would smile, apologize, then do whatever the h*** he wanted - often liked to start a load and go out for the night, with casual oh I forgot about the wash! So sorry~ then hinting he wanted us to hang his laundry for him.

About towels..... I sometimes end up sharing a towel with Henry because I'm the type to just grab the nearest towel I see 🙂

Most of my guests were nice, NORMAL people, with minor individual differences - I host mostly exchange students for whole semesters so I usually get to know them well and observe living habits.

Oh. Another thing about my most recent guest..... for some unknown reason, half way into his stay he started throwing away his used kleenex (large wads all bunched up) in the recycle bin. Personally I think he was being passive agressive. 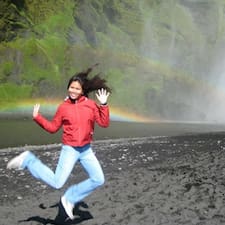 Thanks for sharing the laughs, Steve & Jayne.

These are all small things we found amusing:

We left a can of chef boyardee for a guest who checked in late as a snack. We couldn't find the can itself in the garbage (we recycle) after she left the following morning.

A couple that didn't eat dinner even though we are steps from restuarants with varying prices.

We also deal with the never ending shedding, but unfortunately I shed just as much! I don't think hair chemicals are the only thing to blame. I think it's the length of hair and the fact that we have to pull our hair out of our faces with a hairband which weakens hair causing it to fall. I've become so paranoid about my hair falling onto bedding, I am thinking of wearing a hairnet while cleaning.

@Armen1443  You have zero profile info and no history either as a host or guest.

Stop posting your Spam on this forum- advertising is not allowed here.