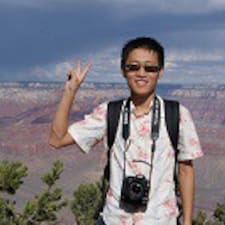 Here's the story. I had a guest checked in on July 1st. The original booking was for 2 nights. On the morning of July 2nd he messaged me saying he was going to leave due to a "family emergency" and asked me to refund the 2nd night. The way he messaged to me sounds like he was entitled for any refund he'd like. I simply rejected that because that's against our cancellation policy. And then he became crazy/furious and messaged me saying he was going to ask his lawyer to talk to me. I didn't want to respond to him and he called me saying he has family emergency that one of his relatives passed away so I, for courtesy, granted him the early departure and refunded him the 2nd night just don't want to deal with those type of crazy guests.

And then on July 19th, he puts in the sneaky request through the resolution center stating that the unit was unclean and something, demanding a full refund. I of course declined that and he involved Airbnb and now Airbnb has not notified me anything about this complain. I guess the guest simply thinks that Airbnb is going to side with him no matter what... The claim was not backed by ANY evidence.

The problem is that I already left him a good review and now I'm so much willing to remove that review from this guest since I feel it might mislead other hosts to think that he's a good guest. I'm not sure if Airbnb has any limitation on the time each party can submit a resolution claim? I feel there should be limitation on this as it doesn't make sense to claim anything after the reservation has ended for a long time. When both host and guest have left reviews for each other, I don't think it makes any sense to allow any additional resolution claim against each other.

@Nanxing0 So you said the guest  ' became crazy/furious and messaged me saying he was going to ask his lawyer to talk to me' and 'just don't want to deal with those type of crazy guests' yet you still gave him a good review. I guess you reap what you sow.

@Mike-And-Jane0 I truly regret giving him a good review. Usually I batch leave reviews every week or two and this was a missed bad apple that I shouldn't have left a good review for him, but I know Airbnb will not remove it no matter what I say.

To my best knowlage airbnb does delete a review if the author who has written the review requests that. That applies to guest- and hostreviews. We once had a case in Germany where that was the issue. Unfortenately I can't remember the thread in which that was discussed.

As @Ute42 said, I have heard of Airbnb deleting reviews at the author's request. You just call and say that your review was written in error and it is not your truthful experience. Please delete. The trouble is getting through to anyone at Airbnb right now. How long are you willing to sit around and wait to talk to someone?

@Ute42 @Emilia42 That's great to know! I'm going to give Airbnb a call and try that.