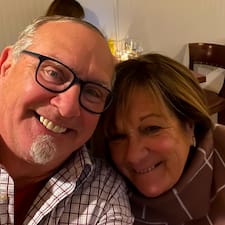 We’ve been hosting for 14 months in a small town.  We have a basement apartment in our home.  We are Superhosts and have 71 great reviews.  This week we had a couple staying for 6 nights while in town to see family.  Upon arrival, they asked if we could adjust the apartment temperature to their liking which we immediately did.  At the same time they inquired if their 2 granddaughters could spend the night on one of their booked nights.  We said that would be fine.  We also messaged and told them that if there was anything amiss or there might be something they needed they should message us and we would comply.  Nothing from them.  Crickets.  We noticed that they did not arrive back from family visits on their last night but didn’t think much of it.  When we went to clean the space this morning, we found a handwritten note stating that our queen bed was unusable thus they had to use the trim beds in the other bedroom which forced them to cancel the grandkids sleepover.  The note also stated that they left a day early.  We checked the bed frame on the queen and one of the supporting slats on the frame had slipped.  It would have been an easy fix.  However, they neglected to let us know.  We would have gladly fixed the problem.  I guess  I’m upset because it is something that could have been fixed!  Now I’m sure that if they leave a review st all,  it will not be a good one. Advice?

@Ken-And-Denise0  I'd suggest messaging them. "Hi XX, so sorry you left early. As we had asked you to please let us know if anything was amiss, so we could have the opportunity to address it, we were rather distressed to read your note. What we found after you left was that one of the bed slats had slipped out of place-that's the only thing that was wrong with the bed. It literally took 2 minutes to slip it back in place and we would have been happy to do that for you if you had only let us know."

That may ward off any bad review, but there's no figuring out some guests.

Thank you!  Really felt the need for a little support!

@Ken-And-Denise0  Unfortunately it's common for hosts to only find out about a guest's issue after the checkout date. The only thing you can really do here - and I do recommend it - is write a message to the guest via Airbnb messenger, saying something like:

"We were sorry to learn that you decided to depart earlier than planned. The bed slats were fully intact after the previous guests' stay, but we were easily able to repair them, and would have been happy to do this for you during your stay if we had been informed about the problem."

In this case the intended audience is actually an Airbnb case manager, in the event that the guest requests some kind of refund after the fact. But if they made a stealth exit out of embarrassment that perhaps they had a wild grandma-and-grandpa date night on the queen bed and broke it themselves, this comment might double as a subtle warning shot against a damaging review.

Was this good communication? (I'd say no)

Did they follow the "rules" of letting a host know their concerns? and hmmm, change the whole house temperature to suit themselves? and oh, we'd like to bring extra guests not included in the reservation... (this wouldn't be marked well in my book)

Cleanliness: is breaking the bed and then disappearing over it, keeping good care of your space? (I'd think no)

After having hosted these folks would you like to recommend them to other abb spaces?

but btw, hopefully you know that you shouldn't enter a review for these folks until the 13th day after their stay ended.

Oh, the review on them is totally on hold.  Interestingly,  these people have been members of Airbnb since 2016 with only one review which stated that, as they had commented on lacking areas regarding several amenities,  the hosts were taking their comments under consideration.  That was my first little red flag. I just had a sense that, no matter what, there was going to be ‘something’.  The irritating thing is that they stayed here for 5 nights with not one request after the temperature issue!  Aside from

us stating  in a message to let us know if they needed anything corrected or, really, anything at all,  this is also stated in the welcome letter! 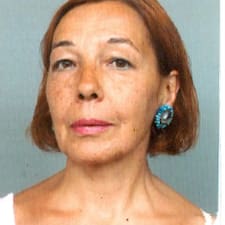 Please, could you let me know if I could read the reviews my guests had written when being guests to other hosts accommodation? I think this would be of great help as I found that there are guests who always write 4 overall with 5 stars all sub-categories, and either no comments nor compliments or untrue complaints. I.e. I had guests leaving me 4 overall - 5 stars all subcategories - complaining of - not toilet paper, not pillows, not bed linen, not towels -  when I always supply all my guests with 2 pillows per person, luxury linen, 3 towels per person and have a drawer full of extra linen and towels, and plenty of toilet papers.

@Lilly28  You won't be able to see the individual star ratings they left for other hosts, but you can access the written reviews they've left.

Go to a review that the guest has been left by a host.

Click on the host's profile photo there who has left the review.

The host's profile page will come up, with all the reviews that host has received.

Scroll down the reviews until you find one that was written by the guest in question.

It can be quite a lengthy process, as you have to keep going back and forth to click on the next host's profile that has left that guest a review. But I've definitely done it myself sometimes if I'm wary.

@Lilly28 Download airview plug in and install on google. Then you will be able to see the reviews left by other hosts and the guests’ reviews left for hosts on the guest profile page.

@Ken-And-Denise0  What a great achievement! 71 reviews in 14 months in a small town with just one property.

No need to worry about one off review. You still have the chance to have it removed if it is very bad.

@Alice595 While I agree that a single bad review isn't the end of the world, you generally don't get to have a review removed just for being negative.

@Ken-And-Denise0, it's always hurtful and disappointing to receive a bad review when we hosts do everything possible to ensure our guests have a comfortable stay. Unfortunately, we just can't please everyone. I just got a negative review from one of my worst ever guests and had to read a bunch of my other reviews to remind myself that I am actually a good host! I agree with @Sarah977 and @Andrew0 to message the guest but without making them feel guilty. Then wait until the 11th hour to review them to hopefully ward off a review from them. If they do leave a negative review, try to shrug it off - most guests will be able to put it in perspective. And make sure you review them so you have the opportunity to publicly respond to theirs.

@Kath9 it seems like that guest is the imagination kind. (was this the sexy crossword guy??)

In other words,  he's imagined that ABB is one certain thing, the thing he's imagined it to be. And when your place turned out to be what you described it as instead of what he imagined it to be then he was upset. He (it appears) wanted you to offer him all the things his past hosts had and that he decided Should be a part of the deal, nevermind what your listing actually said it would be.

This is what is frustrating about ABB's push to think that text and house rules can/should be hidden, and that the only thing that matters in the transaction is the dollar amount. He's used ABB lots, you're an active host and you both had a bad experience. This stay disappointed you both, but you are the most harmed bc you didn't get a say in his "imaginary" listing. You said what you offered, he booked it, but then was cranky that he didn't get what he wanted.

At least your review of him paints an accurate description of his visit with you.