Can I ask my guest to leave without a reason? 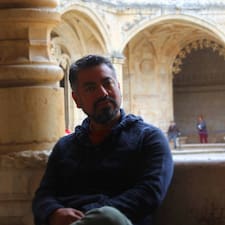 Maybe there are few reason to tell them, but I think nothing that Airbnb has considering before.

They are planning to stay 28 days. However, when they arrived I notice a problem that my preview guest failed to report, which was a small leak that was make a part of the carpet wet.

I explained the situation and I told them that I will take care of it in the following days, which I did unfortunately the leak was a mystery and finding the problem required several people to go into the basement and check where the leak was.

They arrived with a infant, I accept infant in my property but they failed to tell me in advance, I didn't make a big thing because I though it wasn't a problem. However, everything was about the kid, that if I have to go downstair to check the leak it has to be in certain hours, and the kids was taking a nap, etc, and he was asking me in a demanding tone, he needed and iron and vacuum, which I don't say I had in the listing.

Anyway, when I notice it could turn as a difficult situation, I told them that it could be difficult to fulfill their expectation and I could give then time to find another place and airbnb will issue then a refund (expecting discount the nights they stayed with me of course), but he told me that he was find he likes the place and they want to stay.

Today, I had scheduled a person to fix my problem in the basement, and I told them about that, unfortunately it took a little longer for the person to fix the problem and they arrived, when they saw that they went out again, and he sent me a email, telling me that they want part of the payment refund, because of that problem and because they find crickets, which I cannot do a lot about that because I have a big yard, and they are not poison or dangerous.

Re: Can I ask my guest to leave without a reason?

@Antonio1421 As far as I can tell, your choices would be:

a) Cancel the booking directly and accept the penalties

b) Send the guest an Alteration Request with an earlier checkout date and make it clear that an early departure is your condition for giving any kind of refund.

c) Ask Airbnb if it would be possible to grant you an Extenuating Circumstances cancellation on the basis of the leak and/or "cricket infestation" rendering the property temporarily uninhabitable. This would probably require some documentation and willingness to keep your calendar blocked rather than accepting a replacement booking.

d) Begrudgingly allow the guest to complete the reservation

Re: Can I ask my guest to leave without a reason?

Thank you so much, you give me a very good ideas, I have been found in the hard way, that Airbnb has a preference for the guest side and they leave the host alone in the conflicts. It's really awful circumstances because at the end you know that they will write you a bad review and Airbnb won't changed at all, and you cannot do anything even when you tried to do everything right.